The genuine Dustless Blasting machine is manufactured by MMLJ Manufacturing in the USA.

It is a good quality machine at a medium price point. While there are better machines available, these are normally much more expensive than the MMLJ manufactured ‘Dustless Blasting’ machine.

There are many YouTube videos produced by Dustless Blasting USA, marketing the business opportunities presented by this type of machine. This has put this brand of machine front & center in the minds of those who are looking at starting their own business, including many who would never have considered a blasting type business, before viewing the videos.

The machine comes in 6 different sizes, ranging form 5us gallons (aprox 19 litres) to 150us gallons (aprox 568 litres) capacity. All of our inhouse testing has been with the 20us gallon machine (DB500) (aprox 75 litre capacity) coupled with a 280 cfm 7 bar Compair air compressor.

Performance of the machine is solid, with good rates of productivity. The machine takes aprox 75 litres of water, & 90kg of blast media. This gives approximately 1 hour of use with a no. 7 size blast nozzle. Productivity appears to be the equal or slightly better than other types of dustless/wet/vapour blasting machines. The water & blast media usage does, however, appear to be higher than what can be achieved with a machine such as the Graco Ecoquip. Build quality is also good.

Dustless Blasting also sell their own branded’ ‘Dustless Blasting Flash Rust Inhibitor’ which appears to be rebranded  Holdtight 102. The MMLJ Dustless Blasting branded product is very expensive, at $300 per 19.5kg drum (correct as at 2018), PLUS delivery costs. It is also manufactured in the USA.

BlastX 108 is manufactured right here in Australia, comes in a 20kg drum (compared to only 19.5kg for Dustless Blasting Flash Rust Inhibitor), & is from $50.to over $150 per 20kg drum cheaper once delivery costs are taken into account. So why pay so much more for a USA manufactured product, when you can get Australian made for much cheaper. BlastX 108 can be purchased direct from our online store, with free delivery to most parts of mainland Australia & Tasmania. 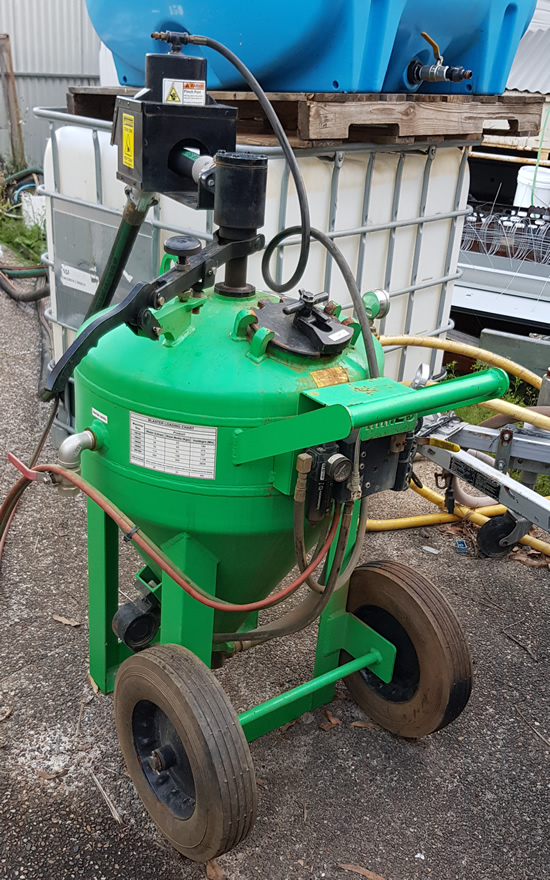 You should also be aware that there are also many machines, manufactured in China, which are copies of the MMLJ  Dustless Blasting machine. However while the Chinese made machines may look very similar to the Dustless Blasting branded machines, the Chinese made machines often use much cheaper components, & the Pressure Blast Pot itself may not meet Australian & New Zealand standards, & may not be able to be certified for use in Australia.

We have had the opportunity to test one of the Chinese Clone machines. & found the performance lacking when compared to the genuine MMLJ manufactured machine. Despite the clone machine being of a similar size to the Dustless Blasting DB500 machine that we currently use, & also using exactly the same 280cfm compressor, & blast media, we could not get the same performance or productivity from the Chinese manufactured clone dustless blasting machine.

One of the problems we encountered was a constant ‘spluttering’ on the Chinese clone machine, which appeared to be abrasive material constantly getting stuck & building up in the blast hose, before suddenly being forced out of the machine by the air pressure, dumping a large blob of abrasive onto the surface being blasted. This not only hurt productivity, but it also seemed to waste a lot of abrasive media. Other problems included nuts & bolts shaking loose, & the blast hose dangerously separating from the machine due to inadequate hose clamps being used.

Also of great concern with the Chinese Clone machine was the deadman switch, which had an unacceptable delay before shutting down the blasting media, & often simply not working at all, with abrasive media continuing to eject from the machine at full pressure, until we shut off the air from the air compressor.

This appeared to be caused by the type of hose shut-off valve used, which requires a 2 bar pressure differential between the pressure in the blast pot, & the pressure going to the shutoff switch. The screw air compressor we were using had a maximum operating pressure of 7 bar (aprox 100psi). We normally run the blast pot at the full 7 bar (the maximum of the air compressor), however due to the type of hose shut off valve used on the Chinese clone machine, for the hose shut off valve to work, we would only be able to run the pressure pot at 5 bar (around 70psi). This is far too low for most jobs.

Anybody considering purchasing one of the Chinese clone machines should thoroughly research the product before spending their hard earned cash, as they will probably have to make many expensive modifications to get the machine to work properly, & may be left with an expensive piece of scrap metal that is unacceptable for use within Australia, due to safety concerns.

We experienced none of these problems with the genuine Dustless Blasting machine. 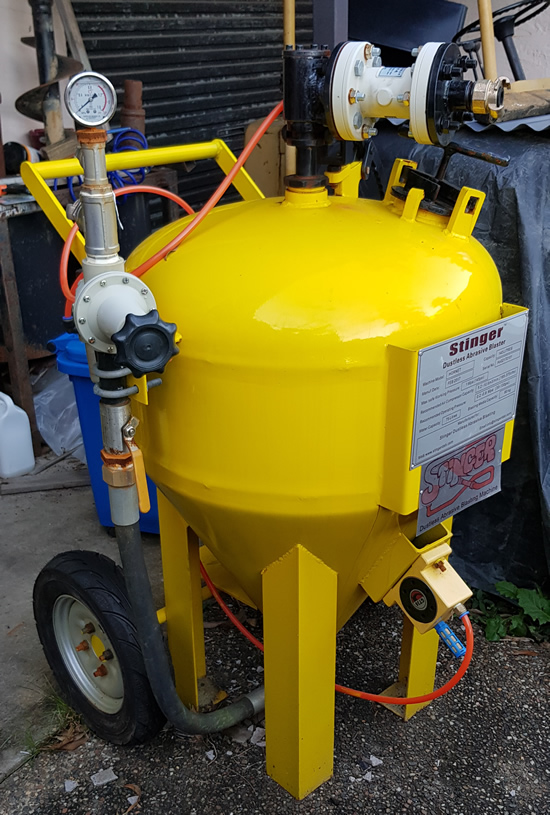 Chinese Clone machine (above) While it looks very similar to the genuine Dustless Blasting machine, we encountered many problems & poor performance in its use.

Powered by WordPress  |  Rethink by InkThemes.